A man's nose should not be as thin and very raised as a woman's nose, or the nose should not be very hollow. The presence of the nose arch, in part, contributes to the strong, mighty or masculine appearance of the nose owner. Men who apply for male nose surgery usually want to get a natural look so that they are not obvious from the outside. The nose can be reduced or enlarged; the width of the nostrils can be narrowed; the angle between the nose and the upper trunk can be changed or the shape of the nose or the belt can be changed with male nose aesthetic operation. In addition, men who choose the best male rhinoplasty to correct problems that they want to be in breathing.

Nose Job Surgery For Men - Before and After Video


The videos above show the shape of the nose before and immediately after surgery.

Men naturally have thicker nasal skin in this area, while a narrower, more pronounced tip often appears more feminine. Thicker skin can sometimes complicate rhinoplasty for male patients. The nose tip angle is generally around 90 degrees in males and the nose tip is less raised than female nose. In men, the nasal skin is usually thicker and limits the amount of change that can be achieved.

Noses with a flat or slightly convex belt (back profile) are generally seen as more masculine. A narrower, slightly concave bridge is thought to look more feminine. One of the concerns that both men and women share is the emergence of the ridge in the nasal arch, which is particularly noticeable in profile views. Minimizing a hunchback while maintaining the feminine or masculine appearance of the nasal arch is an important technique for surgeons. 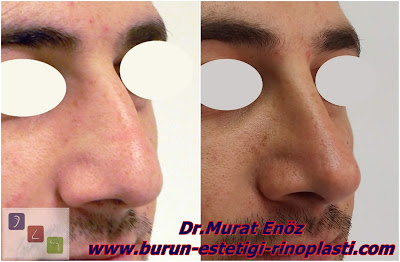 The nasal dorsum (or nasal arch) ties the tip of the nose to the face, so we often call it the “bridge. Any abnormality in this part of the nose, especially when viewed from the side, plays an important role in facial aesthetics. If there is a hump in the upper region, it will probably consist of bone, while the lower region will probably be made of cartilage. Nevertheless, often, the hump, cartilage and excess bone will coexist.

Although trauma and nasal injury in later life are common causes of dorsal hunchback, the main contributing factor is genetic. It is important to know if the cause is due to inheritance or injury. The presence of a small amount of nasal belt in male nasal esthetics may be perceived as "natural", "charismatic", "strong" or "self-confidence". It should be noted that many powerful kings who have lived in history have arched their noses.
Thick skin rhinoplasty operation was performed on the patient shown in 2 photos and 1 video above. In the photos of the patient before and after rhinoplasty, the tip of the nose was lifted up and the projection of the nose tip was reduced.

Size characteristics of the nose


Generally speaking, a more pronounced nose is considered a stronger, more desirable male facial feature, as long as it is proportional to the rest of the face. Women tend to prefer smaller noses.

The "ideal length" of a man's nose is slightly longer than that of a woman. This feature is also associated with less raised nose tip.

It is very important to ensure that the image is natural and the masculine expression is preserved! 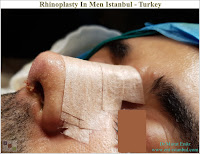 There was a perception that the number of women who used to have aesthetic nose surgery was much more than men, in other words, men rarely had this operation. This situation has changed in recent years. Men now have nose aesthetics as much as women.We can evaluate patients who are candidates for aesthetic nose surgery in three groups:Patients who have no surgery for purely aesthetic purposes, those who have nasal congestion and also demand an aesthetic improvement, and those who have a previously traumatized nose, to remove nasal congestion can only be achieved by aesthetic method. I see that the proportion of men with a traumatic nose is higher among women in this last group of patients. In fact, each nose is personal. This is one of the most important points that differentiates aesthetic nose surgery in terms of surgeon. It is very important to understand the person applying for the surgery very well and to determine their expectations very well.

Why is the male nose different? 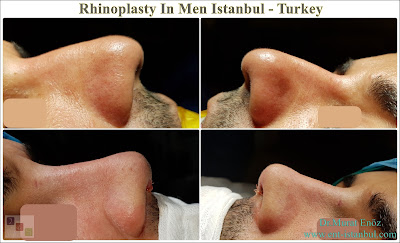 The aim is to get a good breathing, harmonious, non-artificial nose. Although some common rules like 'golden ratio' have been described, the secret of success is to work personally. Naturalness is a concern in male noses that is more prominent than in women. Excessive lowering of the back of the nose and excessive lifting of the tip of the nose can lead to a condition called 'feminization'. This may cause a serious problem in the body perception of the person who has the operation. In this respect, it can be said that it is more difficult to make aesthetics on male nose. It is even known that some surgeons prefer not to perform aesthetic interventions on male noses because they consider it more risky.
Generally, men are more exposed to nasal trauma since childhood. Therefore, curvatures are seen more frequently in men both outside and inside the nose. This situation brings along functional problems besides aesthetic problems. In other words, in male rhinoplasty candidates, breathing problems in the nose are more common than women. In male rhinoplasty, the aim is to correct the nose as a whole without sacrificing any of the aesthetics and function as in any rhinoplasty surgery.

How to increase success in rhinoplasty operation?

The person performing the surgery is not only experienced in aesthetic nose, but also in nose aesthetics in men.The fact that the physician understands the person who will be operated, the person who will be operated well before the operation, a good planning and the correct technique plays an important role in reducing the risks associated with the operation.