Who is Required for Tonsil and Adenoid Surgery?

﻿
﻿﻿
Tonsils and adenoids are members of the lymphoid structure in the throat area and defense system against the microbe. Tonsils produce the types of white blood cells that fight against certain diseases. For this reason, the immune system of the tonsils is thought to be the first defense line role against bacteria and viruses entering the mouth. This function can leave them particularly vulnerable to infection and inflammation. The problem is more common in children because the immune system functions of the tonsils are most active before puberty. Moreover, unlike an adult immune system, a child's system is less exposed to bacteria and viruses and has not yet developed immunity. Microbes can be an exaggerated response, and in children, naturally adenoid and tonsils can grow much more easily than adults.

Tonsillectomy (tonsillectomy) can be roughly required for the following reasons:
• Recurrent, chronic or severe tonsillitis
• Complications of enlarged tonsils
• Bleeding of tonsils
• Other rare diseases of tonsils (tonsil cancer)

If there are frequent ongoing tonsillitis attacks, humiliating the tonsillectomy:


The procedure can also be suggested in the following situations:

• Tonsillitis-forming bacterial infection does not improve with antibiotic therapy

• Tonsils abscess (peritonsillary abscess - an infection, drug treatment or drainage procedure that results in an infusion of inflammation behind the tonsil, or recurrence).


Health problems due to enlarged tonsils:


After frequent or ongoing infections, the tonsils may grow or be naturally large. As the tonsils grow; tonsil operation can be used to treat the following problems:

Tonsillectomy can also be used to treat other rare diseases or conditions of tonsils:

﻿
﻿﻿
Adenoidectomy (adenoids surgery) is a surgical procedure in which the adenoids removed. Adenoids  are lymphoid tissue behind the nose. They are not generally understood by physicians who are not experts in the otolaryngology because they are not observed during routine physical examination due to their location. Although the adenoids are the same as the tonsils of the tissue, the diseases associated with infected adenoids differ from their location in relation to the tonsils (nasal obstruction, mouth open sleep, recurrent sinusitis attacks and middle ear inflammation attacks ...).
﻿
﻿﻿
Adenoidectomy is usually performed together with other surgical procedures (eg, tonsillectomy, insertion of tympanostomy tubes). In fact, in the majority of the 20th century, tonsillectomy was often performed with adenoidectomy. Despite more than 50 years of research, some debates are still linked to indications for adenoidectomy. Tonsillectomy and adenoidectomy were performed by appointment, especially early in the 1900's, with tonsils and adenoids being considered infectious reservoirs causing a wide variety of diseases. 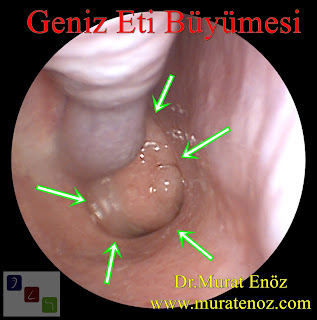 Adenoids are seen at birth and then grow up. Individuals with tonsils continue to grow up to the age of 5-7. Adenoids become symptomatic with snoring, nasal airway obstruction, and shortness of breath during sleep, usually when children 18-24 months of age are admitted. Adenoids usually begin to shrink as children reach school age, and when they arrive before or during adolescence, adenoids are often small enough for the child to become asymptomatic.

Adenoids can be infected and contain pathogenic bacteria that can cause ear, nose and sinus diseases.
﻿
﻿﻿

The indications for adenoidectomy are as follows:

• Recurrent and / or chronic sinusitis

I would like to share with you a paragraph in the source that briefly summarizes the indications for tonsillectomy and adenoidectomy: