Tonsillectomy (tonsil removal surgery) is one of the most common surgical interventions in the world. The frequency of tonsillectomy has increased especially in the last 30 years. The reason for this is that the relationship between tonsil size and sleep apnea syndrome and cardiovascular diseases is clearly understood.


Tonsils are located at the entrance of the throat adjacent to the muscles of swallowing, where there are many sensory nerves. During tonsillectomy, there was more or less mucosal injury and damage to the muscles swallowing; it is natural to see pain after the operation. For weeks after the old tonsil operation methods, solid food can not be renewed; the swallowing of the patient's spit was considered a normal condition.

Current tonsillectomy techniques are designed to minimize bleeding and pain. Among them, the method known as "Thermal Welding Method" is the most advantageous.

Tonsillectomy Operation With Thermal Welding Method and Its Advantages


When tonsils are removed, damage to the muscles of the tonsils and mucous membranes occurs more or less. Especially, in the operation method using classical bipolar, the heat damage can be at 300-400 degrees. The method known as "Thermal Welding Method" among tonsillectomy techniques has the least loss of heat damage and blood loss during surgery. When this method is applied correctly, post-operative pain will be reduced to the lowest. Apart from the tonsil pit, there is a muscle group functioning in swallowing function. In addition to the heat damage, these tissues and other mucosal areas that may be exposed to damage may also increase the amount of pain. For this reason, whichever method is used, minimizing damage to muscles and mucosal areas; the patient can feel much less pain after the operation.

Proper Use of Thermal Welding Device is Important!


Thermal Welding Device has two separate modes. At the tip of the funnel, the first mode is to close the small vessels with heat energy to stop the bleeding and to provide the second mode of cutting. Although the first mode is used in excess, it is a system that prevents heat transfer in the probe tip; increases the likelihood of heat injury to the surgical site. For this reason, I prefer to stop the small bleeding areas that occur during the operation with mucosa suture, without using the first mode too much.


Above, the videos of thermal welding tonsil operation are shown.

Although pain occurs after tonsillectomy; taking soft oral water from the mouth and constantly washing the surgical field, keeping the body water level high accelerates healing. Especially in patients who do not consume watery oral food due to pain, a vicious cycle can occur, such as a growing sore throat and a growing restriction on nutrition.


It is natural to see more or less pain in all tonsillectomy techniques. In other words, the phrase "painless tonsil operation" will be a bit exaggerated. Nevertheless, the thermal welding method is used correctly, cold serum washing is performed in the tongue and throat region during the operation, injection of the local anesthetic is made with the thinnest needle in the operating area, the front and back plates are stitched together and the open mucous minus area is not left. may cause the postoperative period to pass. However, starting 4 hours after the effect of the local anesthetic, the cold ice cream and soft warm diet may prevent the pain from occurring. In this way there were no patients who could not use pain relievers and were discharged on the day of surgery and went shopping.


Frequent intermittent drinking of water is very important after the operation. In addition, protein content is important for accelerating healing of high mild, warm foods. The first 10 days after tonsillectomy is the most risky period in terms of bleeding. Drinking frequent water will also keep the surgical field moist. For example, drinking half a glass of water in half an hour (taking time off at night and drinking water can speed up healing in the same way). Bleeding is more common on the 10th day, especially due to the change in collagen structure at 10th day. For this reason, nutrition and care for the first 10 days are very important. After tonsillectomy, eating acidic, salty and overly spicy foods with hard, hot, sharp edges is inconvenient. Such foods may cause mucous membrane damage and healing to be adversely affected; hot food can cause enlargement of the veins and start of the bleeding. Gum chewing can help to accelerate healing by providing an antiseptic secretion to wash the saliva and throat pathways.

The price of bloodless, painless, and knifeless tonsil operation performed with Thermal Welding Device varies between 2,500 - 4,000 US Dollars according to hospitals. 1 day hospitalization, blood tests and all instruments are included in this price list.

How Many Days Do You Need to Stay in Istanbul After Tonsillectomy Operation?


It is suitable to stay in Istanbul for 7-10 days after the bloodless, painless and knifeless tonsil operation performed with Thermal Welding Device. Our patients are returning to their earlier country. Of course the ideal is to stay here and come back to the checkup. 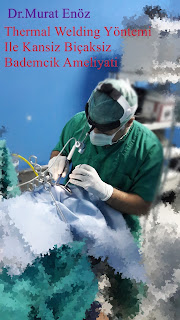 I wish you a good luck on your surgery ...