Why Should Tongue Tie Release Surgery Be Performed Early?

Tongue tie causes complaints such as difficulty in suckling babies, incomprehension of the mother and difficulty when talking in older patients, and inability to tell some of the words clearly. The biggest problems related to tongue tie in small babies are breast difficulty, premature termination of breastfeeding, reduced amount of absorbed milk, early start of supplementary food, mother's nipple damage and breast infections (mastitis).

If the tongue tie release surgery is performed late, there are risks such as structural changes in the tongue, the child being able to perceive the current operation, and the risk of traumatic stress disorder if performed under local anesthesia, and retardation in speech skills. 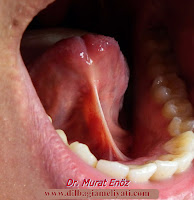 Tongue tie release surgery has many advantages in that it can be performed as soon as possible after diagnosis. The tongue, which is usually a thin membrane, can be easily removed under a simple local anesthesia. In this way, the child is prevented from living unnecessary stress in feeding and talking.
Tongue tie release surgery is performed in newborn infants to make breast feeding easier and more comfortable. It is recommended that this procedure be performed in infants who are symptomatic.

My website of  and www.dilbagiameliyati.com" has been opened for you to answer all questions about tongue tie and tongue tie surgery. ​​ ​​ ​

You can see some of videos about bloodless tongue tie release surgery and tongue tie treatment at the below: