Corona Dogs at Work in Chile!

Dogs Are Being Used to Detect Infected People With Covid-19 in Chile! 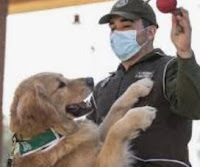 Police dogs are being trained in Chile to open public areas such as sports centres, airports and shopping malls. The dogs are thought to have picked up the scent of covid-19 patients.
Public areas in Chile, where the new center of the Corona virus is located on the South American continent, have been closed for some time.
Authorities in the country are using an interesting method as part of the normalization steps.
According to Fernando Mardones, an episothiologist in Chile, dogs can detect the scent of corona virus patients.

Dogs in the country are being trained to detect corona virus patients. These dogs are intended to function in crowded areas such as shopping malls, gyms and airports.

Four puppies are being trained in the initial phase of the project. Corona virus patients are thought to sweat and leave a special smell because of the symptoms they experience.

The trained dogs are intended to pick up the scent and alert the police.
Chilean police are training sniffer dogs to detect coronavirus in people's sweat at an early stage, after a similar trial in the UK yielded encouraging results.
They are trained at the Chilean Carabineros ' specialist training base in the capital Santiago.
Sniffer dogs are best known for detecting drugs, explosives and humans, but are also trained to detect diseases such as malaria, cancer and Parkinson's disease.
Lt. Col. Cristian Acevedo Yanez, director of the police special training school, said dogs have more than three million olfactory receptors - more than 50 times that of humans - so they are uniquely placed to help fight coronavirus. He said dogs could play a critical role as Chile tries to slowly reopen its schools and stores and bring people back to work.
Julio Santelices, a member of the Chilean police, said that while a dog can smell 250 people an hour, places like stadiums, schools, restaurants would be opened first.

More than 19 million people live in the South American country of Chile. So far, more than 336 thousand Covid-19 cases in the country, while more than 8,700 people have died.
Chile is one of the countries with the highest number of Covid-19 cases compared to the population.