The eardrum allows the sounds coming from the outer ear to be collected and transmitted through the middle ear. In other words, it is a surface area where sound waves multiply and vibrate. But it also serves as an important barrier between the outer ear and the middle ear. When the eardrum is punctured, water escaping to the ear causes infection, causing the ear to flow. 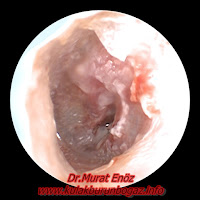 Eardrum inflammation in childhood, eustachian tube problems between the ear and nose, some vaccines are not given or incomplete, structural problems, traumatic causes (traumatic eardrum perforation) and upper respiratory tract infections may remain due to the hole. If the tympanic membrane is punctured due to traumatic causes, the eardrum may renew itself within 4-6 weeks. If it is not renewed within this period, the eardrum perforation remains permanently. Perforation of the eardrum during childhood causes hearing loss and lags behind in education. In later ages, when hearing loss is added to the hearing loss due to the fact that the eardrum is a hole, communication becomes worse. In the middle age group, the eardrum plays a role in restricting social life. Nowadays it is very easy to solve this problem with the opportunities provided by technology. In the past, behind the ear opened and wrapped around the head methods are not used today. In the current technology, the eardrum can be easily repaired by endoscopic cartilage through the ear canal. Those who are forced to enter the sea because the eardrum hole in the pool when taking a shower, people who are worried that water will escape. Because the eardrum is a hole, people with communication problems can easily get rid of this problem.

How can you understand the your eardrum perforation? 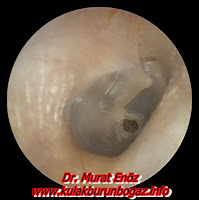 The following complaints should be taken into consideration in order to understand that the eardrum is perforated; ear pain, discharge, small or large-level hearing loss, frequent tinnitus, dizziness and related nausea and vomiting complaints, facial loss may occur, such as ear sounds previously heard in the ENT doctor should be examined. The tympanic membrane treatment varies according to the severity of the tear, and if a small tear occurs, it may be closed spontaneously and may not require surgery. If the tear is large, different surgical procedures are performed.

When the hole in the eardrum becomes permanent, it is treated with operations called myringoplasty and tympanoplasty. These operations are based on the closure of the eardrum with tissue (patch).

How is eardrum surgery performed?

Eardrum surgery is performed under local or general anesthesia. It can be applied by different techniques. Surgery can be performed behind or behind the ear. However, to be made through the ear, the hole must be small or the ear canal should be of suitable width. The tissue (patch) placed to close the hole can be ear cartilage, cartilage membrane, both, or the membrane of the chewing muscle behind the ear.

It takes about 2-3 weeks for the patch to integrate with the eardrum. Eardrum surgery is usually a successful operation. However, it may be necessary to repeat if the hole does not close. It takes 2-3 months for hearing to improve. Please wait at least 6 weeks to comment on hearing.


The period following the tympanic membrane surgery is as follows;


Patients are discharged the next day after the necessary dressings and care after the eardrum repair surgery. It is recommended to be protected from influenza and similar viruses for one month after surgery. In addition, care should be taken to avoid any physical impact to the ear. It is also important to prevent water from escaping into the ear. In case of contact with water it is recommended to block the ears with vaseline cotton.

The mouth should not be closed when sneezing is needed. The drug should be used for 2 weeks to prevent severe coughing. Surgical ear should not be touched with water for 2 months and should be cleaned with the ear cleaning method recommended by the doctor.


There are some points that the patient should pay attention to after eardrum surgery. These;


In conventional eardrum surgeries, tissues were usually opened with an incision of approximately 4-6 cm in front of the ear, less likely behind the ear, and surgical procedures were performed with a microscope. The operation time was 3-4 hours because of the risk of bleeding depending on the size of the incision. For the repair of the tympanic membrane, pieces of tissue are removed from the back of the ear and large wound cavities occur in this area. Microscope is used in the surgery, when the operation is finished, a tampon is placed to prevent the ear canal from being clogged, tissue is collected in places where blood accumulation, abscess inflammation and hard coils were made under pressure. However, with the developing technology, there have been serious improvements in ear surgeries. Endoscopy (micro camera) is now used in ear surgeries. In this way, the ear canal without any incision with the help of the camera and special surgical instruments can be easily repaired using the eardrum. With this method, the bleeding remains at the level of micro hemorrhage, and there is no need for stiff pads and dressings because there are no sutures and wounds due to incision. In experienced hands, the dice can be repaired in as little as 45 minutes. Since the suture is not a dressing pad, the patient has almost no pain and can return to normal life in as little as 2 days. In a short time, painless, seamless, quickly return to normal life with this method, ear surgery is no longer fearful for patients. This method is performed by experienced ear surgeons who have been specially trained for this application.


You can find details about "Rhinoplasty in İstanbul" and before and after photos at >> Endoscopic Eardrum Repair in Istanbul / Perforated Eardrum - Definition, Causes, Symptoms, Treatment / Causes, Symptoms, Diagnosis and Treatment of Ear Drum Hole ﻿