About The Healing Process After Nose Tip Plasty Operation

I would like to summarize the following who are waiting for you during the healing period after the nose tip plasty operation :​ ​​ ​​ ​​

- Unlike rhinoplasty operation, no bone broken techniques are applied to the nasal bone. After the nose tip surgery, there is no visible jaundice, no bruising (if nasal hump reduction is performed, the bruise appears on the nose).

- Nose bandage  and external nasal splint are not applied (if nasal hump removal is performed at sametime, nos ebandage can be applied).

- If septoplasty operation and turbinate radiofrequency operation for nasal breathing problems are performed during operation, silicone splint or dissolving buffer may be placed in the nose.

- As the nosebone is not touched like nose tip aesthetic surgery, the impact of the nose during sleep may not cause problems in the short term; patients with nasal aphasia are still sleeping for at least 3 weeks on the nose (position on the face).

- Glasses can be used after 2-4 weeks (please consult your physician in this regard and do not use heavy glasses, do not wear glasses in the nose tip region)

- I usually prefer open surgical nasal aesthetic surgery and all the stitches on the nose tip will spontaneously fall within 1-3 weeks.

- Moisturizing drops and spray must be applied to the nose after the procedure.

- There is an increase in nasal edema in the first week after the procedure and it usually decreases within weeks and this edema will cease to exist. Patients with thick nasal skin may have more nasal edema. 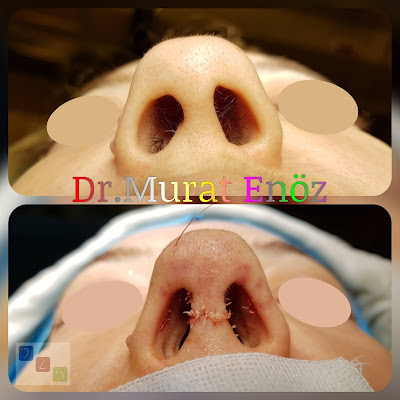 It is very important to know that the swelling caused by surgery is a temporary condition where the nose appears temporarily wider and the tip is opened more and become less refined than desired. You will notice that the swelling of the nose begins to decrease within a few days. All the swelling in your nose will be greatly reduced in the first few weeks after surgery. Although most of the swelling will resolve within a few months, your nose will continue to heal for up to a year after surgery. Patients who only undergo septal surgery do not normally show significant swelling outside the nose.

On the below you can see some photos which about nose tip plasty, nose job without bone broken, nasal hump removal: