In patients with ethnic nasal features, the following characteristics can be detected, unlike other patients:
- thicker and oily skin features than normal
- flattened nasal root
- broad nasal bone
- wide and flat nose tip
- round nose tip
larger than normal nostrils
- Weak nose tip support (nose tip can hang down easily when touched or while the patient is laughing)
One or more of these features can occur simultaneously in patients. People in the Asian and African regions have different nasal features. Sometimes, in mixed people born from the marriage of people of different geographic locations, these traits can occur at different levels. The patient, who appears in the video and in the photos below, does not have all of the classic ethnic nose features. During the rhinoplasty operation performed on the patient, the alar base resection was not performed because the nose wings were not abnormally large. 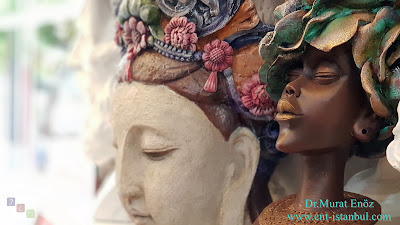 Especially in patients with extremely thick skin features, a longer recovery period than normal (sometimes up to 2 and a half years for the removal of edema), a longer period of swelling than normal, a long-term round appearance at the tip of the nose due to excessive camouflage effect may occur.
During the operation, I usually perform two-level skin dissection and subcutaneous tissue removal at the tip of the nose with open technique. Subcutaneous tissue can be used in some patients to fill the nasal root. Although the skin becomes thinner in this way; Subcutaneous tissue can reappear depending on genetic characteristics. In aesthetic nose surgeries, "skin shaping" can be perceived as almost impossible.
Unlike normal, the following recommendations may be appropriate for patients after thick-skinned rhinoplasty:
- bedtime nasal taping
- salt restriction
- nasal massage
- use of bormelian igib products to remove edema and bruises
- using arnica montana gel
cortisone injection
Despite all these precautions, retinio-derived creams and gels can be used in patients with excessive swelling in the nose. Laser application is controversial. 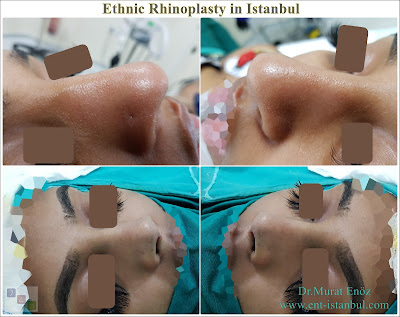 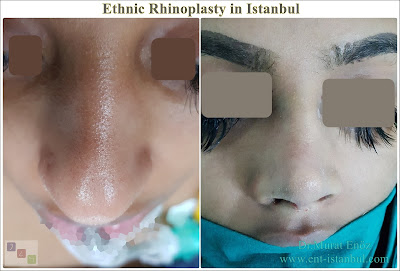 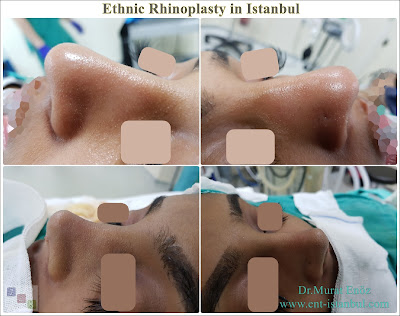 You can find more information and photos on the subject in the links below:
Similar links >> Why Ethnic Revision Rhinoplasty is a Difficult Operation? / Ethnic Rhinoplasty in Istanbul