What Is The Aim of Nasal Aesthetic Surgery?

​ ​The Aim of Rhinoplasty Operation? 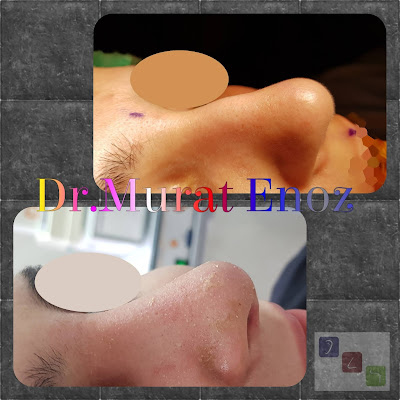 Objectives in rhinoplasty or nasal aesthetics can be summarized as follows:

The purpose of nose aesthetics is not to obtain a perfect nose; as outlined above, to obtain a facial, functional and beautiful looking nose.

The only purpose in nose aesthetics is not beauty!


The purpose of rhinoplasty surgery is to correct deformities of the nose and to remove the problems like nose furrows which prevent the breathing in the nose at the same time. In the preoperative period, all the aesthetic, functional complaints and expectations about the nose are discussed thoroughly with the doctor, as well as using the technology to preview the possible consequences of the surgery and to reduce the risk of experiencing frustrations after intervention by providing the patient with visualization after surgery.
Rhinoplasty is a surgical procedure to correct the nasal shape disorder. It is the most performed operation in aesthetic surgery. In this procedure, which is performed under the name of rhinoplasty, the bone and cartilage curvatures (Deviation surgery) that prevent the patient from breathing are corrected. Small and hollow noses that are raised, revealing nostrils, as before, are not in demand.
The nose is the body that provides the air passage as a function located in the middle part of the face. It is necessary to pay attention to this issue while performing aesthetic nose surgery. Also, the functions that are broken should be corrected during the same surgery.
The success rate of the surgery determines the skin characteristics of the patient, the thinness and shape of the cartilage, the old trauma and deformities that develop in the cartilage and bone, and the healing potential of the tissues.
Aesthetic nose surgery is the process of separating bone and cartilage tissues from skin and mucosa and reshaping bone and cartilage structures. It is performed through incisions made through the patient's nostrils. The incision area trace left at the columellar incision site performed in open technique rhinoplasty operations generally disappears in a few weeks.
Patients who have completed the age of 18 and have completed the growing age are considered as suitable candidates for aesthetic nose surgery.
Patient selection prior to aesthetic nose surgery is an important issue to be considered. It is necessary to ask the patient why he wants to have surgery. The expectations of patients who have dreamy expectations and who come with photographs in order to resemble artists should be discussed with the patient in detail and brought to a realistic level. Patients with psychiatric problems should refer to the psychiatrist before the plastic surgery.
The patient is given real and accurate information about the surgery. If the plastic surgeon can meet at a common point with the expectations of the patient, the decision of surgery is made. The photos of the patient are taken and an agreement is reached about the desired shape on the computer. The preparations of the patient are made before the surgery. Surgery is performed by making detailed planning specific to each patient. Nose is a very important aesthetic component that is located in the middle of our face and reflects the facial character. More importantly, one of our 5 senses, the sense of smell and the respiratory organ with vital function. A stuffy nose forces mouth to breathe. As a result, health problems such as mouth, throat, upper airway diseases, voice and sleep disorders occur. In the case of aesthetic surgery in an organ of such a functional importance, the main thing to consider is not to cause dysfunction by damaging the integrity and compatibility of the intranasal structures. As a message, we can say that rhinoplasty should promise a working nose afterwards.
Aesthetic nose surgery is performed under local or general anesthesia. It is an operation that takes an average of 2 hours. After surgery, a tampon is placed in the nostrils and a splint is placed on the nose. There is a small amount of swelling and bruising around the eyes. The bumpers are taken after 1-2 days to allow the patient to breathe, and the splint is taken after a week to return the patient to normal life.
Visible swelling decreases within 1-2 months after aesthetic nose surgery. 6 months-1 year should pass for the nose to take its final shape. The patient is called for control periodically and changes are monitored with the patient. 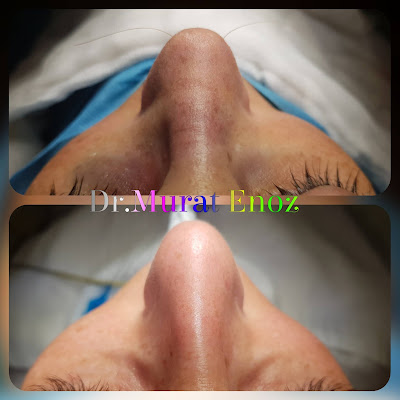 If rhinoplasty is performed by aesthetic surgeons who are experienced, knowledgeable, have aesthetic vision and know high-level techniques, they have a satisfying result for the patient.
Many years ago, the 'hokka noses - overturned and upright noses' dream of almost every woman has already become history. The purpose of nose aesthetic operations is to create a 'natural' nose that can breathe well and is suitable for the face. So now it is taken into account whether the nose really needs an aesthetic operation. But in what cases is nose aesthetics applied? Rhinoplasty, in other words, nose aesthetics is one of the most common aesthetics in our country. The reason for this is that the nose has a very important position in our face shape since it is located in the middle of our face. The 'hokka noses' once desired by almost every woman are already in history. The goal of rhinoplasty surgery today is to make a 'natural' nose that is functional, that is, suitable for the person's facial expression. Therefore, nobody responds positively to 'I want to make my nose aesthetic' immediately; whether the person really needs it.

Many years ago, almost every woman's imaginary 'very thin and contrived noses' has already been mixed in history. The goal in nose aesthetic operations is to create a 'natural' nose that can breathe well and fit the face. So now whether the nose really needs an aesthetic operation is taken into account. In which situations is the nose aesthetic done? Rhinoplasty, in other words, nose aesthetics, is at the head of the most aesthetics in our country. The reason is that the nose has a very important position in our face because of being in the middle of our present day. The 'yoke noses' that almost every woman wants for a while have already mixed. Today, the aim in rhinoplasty surgery is to make a 'natural' nose that is functional, that is breathing and suitable for one's face expression. Therefore, anybody who applies for "I want to make a nose aesthetic" is not immediately answered positively; it is being checked whether the person really needs it.
﻿
﻿﻿
﻿﻿﻿
You can find details about "Aim of the rhinoplasty operation - The purpose of the nose job surgery - In which situations is the nose aesthetic done? - Nose job in İstanbul - Nose job in Turkey - Rhinoplasty in İstanbul - Rhinoplasty in Turkey" and before and after photos at >> Rhinoplasty in Istanbul