How Does It Affect The Appearance Of The Upper Lip After Rhinoplasty? 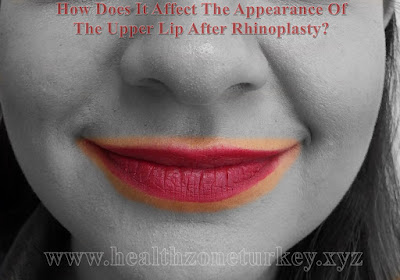 Considering the aesthetic importance of the nose in the facial anatomy of the person and the values it has in terms of functionality as the main organ of breathing; It will be clearly seen how important surgical interventions to the nose are for the person.
After rhinoplasty surgery, the nasolabial angle (the angle between the columella located in the middle of the nostrils and the upper lip) increases and the tip of the nose turns upwards. As this movement increases, the upper lip appears wider and longer. In some cases, lip filling procedures can be performed together with rhinoplasty. It is reported that most rhinoplasty patients are satisfied due to the increase in upper lip prominence after surgery. Especially in patients whose preoperative columellas are prominent on the side and whose columellas are pulled upwards after surgery, the change in the upper lip appearance may be more pronounced in patients with more nasal tip rotation. This is not a problem, it is perceived as a part of the beautiful appearance.
Since the nose is in the middle of the human face, it is a structure that determines the external appearance of a person significantly. The nose consists of the outermost skin and soft tissues, bone, cartilage and ligamentous support tissues. The nose has respiratory, moisturizing, filtration, temperature regulation and protection functions. These functions are regulated by the septum, concha and nasal valves.
Before any operation, the patient's complaints and expectation level should be thoroughly evaluated. Patients whose complaints are proportional to the degree of deformity are suitable candidates for surgery. Systematic and comprehensive nasofacial analysis is performed to determine the surgical plan. The nose is evaluated within the integrity of the face. The type, thickness and structure of the nasal skin are included in this evaluation.
Rhinoplasty can be performed on patients who have reached physical and mental maturity and have completed the development of nasal structure and tissues. Rhinoplasty can be performed both to realize aesthetic purposes and to correct breathing difficulties by opening the curvatures in the nose.
In interpersonal communication, it has many gestures and expressions that enable us to express ourselves and positively affect the perception of the other party. These gestures and expressions are of great importance, the harmony of the structures in our face with each other. Before the operation, thorough examination of the existing anatomy and adequate nose and face analysis are the main factors for a successful result.
There are two different approaches in modern rhinoplasty: open and closed intervention. Both approaches have advantages and disadvantages. We often prefer the open rhinoplasty technique as it makes the reasons of nasal roof and airway obstructions appear better, which are involved in the etiology of cosmetic deformity. Especially, this technique is preferred in cases secondary to complex nasal tip change, in cases where internal and external deforming forces need to be released further. Rhinoplasty can be performed under general anesthesia or intravenous sedation and local anesthesia.
With aesthetic nose surgery, it can improve the appearance of the patient and thus increase the self-confidence of the person. The most suitable patients for aesthetic nose surgery are those who expect a better appearance and improvement. Complications (undesirable results) that may occur at the end of the surgery are rare and usually insignificant. However, complications such as nosebleeds, infection or reaction to anesthesia are possible.
The important point in facial aesthetics is not the beauty of a single structure, but the balance and harmony between the dynamic structures of the face. For this reason, it is not enough to evaluate rhinoplasty patients in terms of nasal aesthetics alone. It is an indispensable golden rule to evaluate the profile of all patients who come for nasal aesthetics. It is very necessary to evaluate the nose, forehead, lip, chin tip and bottom of the chin together and to ensure a proportional harmony for the happiness of the patient. Especially for a better profile view in side view, the distance between the tip of the nose and the upper lip should be the same.
Since the concept of beauty has attracted the attention of many artists and scientists for centuries, the studies have revealed the measurements and proportions that do not change from race to race for a beautiful face. These golden proportions are accepted as universal and nature is seen everywhere. there are proportions.
Similar link >> Frequently Asked Questions For Rhinoplasty in Istanbul / Nose Job in Istanbul
Murat Enoz, MD, Otorhinolaryngology, Head and Neck Surgeon - ENT Doctor in Istanbul